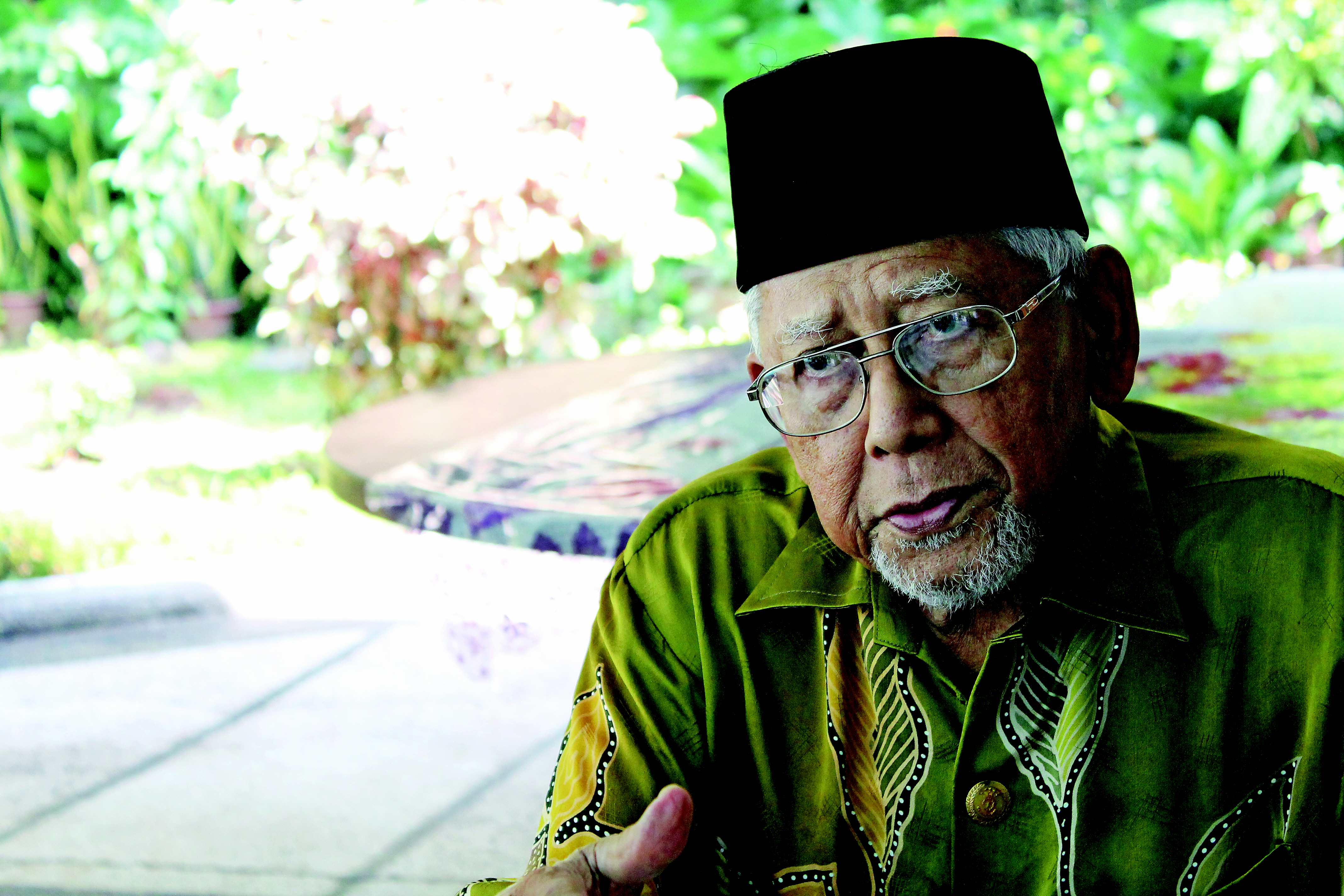 No account of the nation’s development would be complete without recounting the accomplishments of Tan Sri Dato’ Hanafiah Hussain, Malaysia’s first Malay chartered accountant.

Where would Malaysia be today without the men and women who established its foundation and guided its nascent development from agrarian nation to industrialisation?

Such an outcome would certainly have been way beyond the wildest dreams of the erstwhile kampong boy from Yan, Kedah, who didn’t even know what accountancy was. “I didn’t choose to study accountancy. By virtue of my results, I was awarded a scholarship by the state government of Kedah to study in England. Debit/credit was the only accounting that I knew!” reminisced Tan Sri Hanafiah, who was the top scorer in the senior Cambridge exams in his class in 1947. The Kedah government chose to send scholars abroad for accountancy because the state required financial officers. “At that time, no Malay was qualified, and the condition of the Malays was very backward.”

Enrolled in undergraduate studies in commerce at the University of Manchester, he studied subjects such as statistics and applied economics that were esoteric in colonial Malaya. However, his comprehension was hampered by his poor English. Ever resilient, he refused to let it deter him. “I would attend the lecture, then rush to the library to refer to whatever was taught, and jot down notes. The whole of the first year that’s how I studied. With Allah’s help, I understood what it was all about and I began to get the bigger picture of business. I passed 15 papers in three years, not honours but good passes.”

After graduating from the University of Manchester, he enrolled himself in ICAEW to become a chartered accountant (CA). Since he had earned a good degree, he was exempted from preliminary and intermediate papers and was permitted to sit for the final papers. He was only required to serve a three-year articleship instead of five years.

Armed with his CA and his degree, he returned to Malaya by boat and reported to the-then Sultan of Kedah. Since the state had no suitable jobs for him, he was advised to proceed to Kuala Lumpur to work.

His move to the capital in February 1957 marked the beginning of his impactful career in public administration, which was largely devoted to founding, leading and managing socio-economic restructuring initiatives that aimed to uplift the rural poor and catalyse national development.

As one of the few chartered accountants around, his financial management and administrative skills were recognised and sought after. “Any organisation whether in the public or private sector must know their finances and have the funds to run the show. Accountants are trained to be organised and to be good administrators.”

He was instrumental in the founding of the Federal Land Development Authority (FELDA), overseeing the settlement of land in the jungles to provide a better livelihood for the rural poor, many of whom were the majority Malays. “There was no need for the Malays to be poor. There was so much jungle land in Pahang, and underemployment in Kedah, so we brought them over to open up the land.” From 1957 to 1963, he served as FELDA’s General Manager and then as its first CEO. By the end of 1963, FELDA had opened up 32 ongoing schemes.

Fresh from his success at FELDA, he was tapped to spearhead the establishment of the Malaysian Muslim Pilgrims Savings Corporation (Tabung Haji), which aimed to offer a better solution for farmers who frequently sold all their land and cattle to fund their hajj, leaving them in dire financial straits after their pilgrimage. To this day, Tabung Haji is cited as a successful pioneering model of Islamic deposit-taking.

Then in 1965, he was appointed as the first Executive Chairman of the Federal Agricultural Marketing Authority (FAMA). A statutory body, FAMA’s purpose was to eliminate the vicious debt cycle embroiling local farmers by phasing out the middle man.

Understanding that power, authority and influence was essential to realising his goals and the government’s development agenda, Tan Sri Hanafiah participated actively in politics and later on, in trade and diplomacy. From 1964 to 1974, he served as Member of Parliament for the Jerai, Kedah constituency. From 1965 to 1970, he was UMNO Treasurer, Member of the UMNO Supreme Council, and Chairman of the Parliament’s Public Accounts Committee.

At the behest of his old friend and then Prime Minister Tun Dr. Mahathir Mohamed, he was appointed as Malaysia’s envoy to Taiwan from 1986 to 1990. As President of the Malaysian Friendship and Trade Centre in Taipei, he was responsible for courting trade and investment to help create jobs in Malaysia – in 1986, unemployment was at a high of 8.6% prior to the boom times of the eighties and early nineties.

As the country’s first Malay CA, Tan Sri Hanafiah was a prime candidate to help develop the accountancy profession, specifically the localisation of public practice. In the early sixties, the accounting landscape was dominated by foreign-owned firms which controlled the lion’s share of audit and public practice work. To rebalance the status quo, then Deputy Prime Minister Tun Abdul Razak Hussein encouraged Tan Sri Hanafiah and his fellow high-ranking chartered accountants to set up their own firm. Thus in 1964, the first local accounting firm Hanafiah, Raslan and Mohamad was born. HRM eventually became a member of Ernst & Young in 2002.

It was a daunting challenge. “We had to offer our services in competition with the services of the likes of Peat Marwick and Price Waterhouse. They were very well-known brands but we were nobody… To get on, we must be able to audit some of these big companies, but it was impossible to get them to change their auditors. Why should they change after all? We had just set up our firm and we had not been tested.”

Without business, HRM’s savings of 30,000 Malayan dollars could only last them an estimated two years. So HRM tweaked their strategy. “We targeted potential local clients. We started by auditing MARA branches and LLN branches.” HRM also banked on Tan Sri Hanafiah’s invaluable government and political connections to open doors. “Through my association with politics, I had access to ministers such as finance minister Tun Tan Siew Sin and deputy prime minister Tun Dr. Ismail (Abdul Rahman). With the support of all these gentlemen, we managed to get companies to switch over their auditing from the colonial audit firms to us.”

“That is how we started and how we proved ourselves. But it took a bit of confidence convincing then Deputy Bank Negara Governor Tun Ismail Mohd Ali that we could audit banks and finance companies!”

Having just turned 91 on 16 April 2018, Tan Sri Hanafiah continues to lead a rich and full life. Professionally, he lends his vast expertise to business as the Chairman of City Credit Investment Bank Limited, an offshore bank based in Labuan. A devout Muslim, his daily routine revolves around attendance at the mosque (he is a certified professional imam or leader of the congregation), and study of the Quran. His current project is compiling a booklet of selected verses from the Quran, which he hopes to eventually print. His Arabic calligraphy is steady and puts younger people to shame, and he attributes this skill to his formative years in sekolah pondok (Islamic lessons in huts) during the Japanese occupation, when regular secular education was interrupted. Indeed, if he hadn’t been sent to England for further studies in accountancy, he would have enrolled in Egypt’s Al-Azhar University.

Asked about his drivers for success, he attributes it entirely to divine blessings, prayer, and living life in accordance with Islamic principles and sound ethics. “Allah’s blessing is very important, so don’t forget your du’a (supplications). Don’t victimise people. Be fair, just and honest always.”

Studying his enduring legacy, we could theorise that the people who are most productive and content are those with intrinsic values and a higher purpose, such as Tan Sri Hanafiah’s zeal for social responsibility and nation- building post-Merdeka. “I have done my national service from Merdeka onwards, from the time of Tun Razak and Dr. Mahathir, and everything that I touched turned to gold.”

“We were so inspired to develop very quickly and we wanted to be at par with the English. We were committed, and we never thought about corruption and bribery. If we wanted to be rich, we could have become rich very easily because the law then was lax.”

Be Honest and Purposeful

Tan Sri Hanafiah advises accounting professionals, especially auditors, to maintain a “very high sense of purpose and integrity.” As far as he is concerned, accountants should never abandon integrity, which should have been “imbued by your parents. Then, when you become an accountant, the profession also emphasises integrity. It is all part and parcel of the development of the person.”