As Malaysia is on its journey towards becoming a fully-developed and high-income nation, fighting against corruption is high on our agenda. To this end, a few key national development initiatives were developed: starting from the National Integrity Plan (NIP) which was launched in April 2004 with a detailed plan in line with the challenge of establishing a fully moral and ethical society, whose citizens are strong in religious and spiritual values and imbued with the highest level of ethical standards as outlined in Vision 2020, to the Economic Transformation Programme (ETP) and the Government Transformation Programme (GTP) to drive the country forward in 2012. 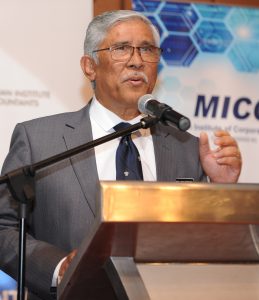 So, how will the National Anti-Corruption Plan (NACP) introduced in January 2019 be any different from the rest of the initiatives?

“The difference is that this time around the NACP is more comprehensive and touches the real nerve, the real root of corruption,” said Tan Sri Abu Kassim Mohamed, Director General, National Centre for Governance, Integrity & Anti-Corruption (GIACC), Prime Minister’s Department. He was delivering the keynote address at the Governance Symposium 2019, jointly organised by the Malaysian Institute of Accountants (MIA) and the Malaysian Institute of Corporate Governance (MICG).

“Basically, the NACP is about translating the aspiration and wants of the public into action. The public has given the message that they want a corrupt-free society and a government that has governance and integrity and fights corruption to the maximum.” He stressed that a corrupt-free society doesn’t mean that there is zero corruption, rather minimal or manageable levels.

Under the NACP, there are six strategies, 17 strategic objectives and 115 initiatives.

The NACP also has more teeth compared to previous plans because the elephant in the room has been addressed – the issue of political funding and accountability.

Out of the NACP’s six strategies, the first underscores political governance and political accountability. And out of the 115 initiatives in the NACP, 35 are on political reform. Twenty-two of these initiatives have been prioritised because they are key contributors to corruption in Malaysia. 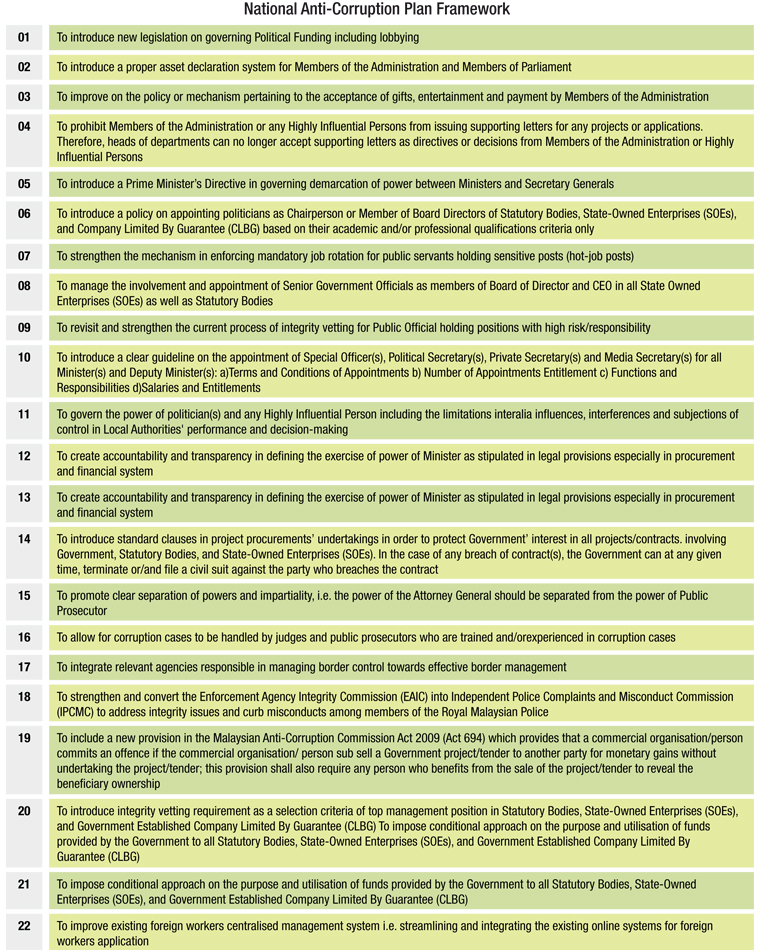 “Political corruption is the mother of all corruption and we have translated that philosophy into the plan… If the political funding law had been enforced, surely the issue of donation would have been addressed because there would be a process and discipline for what you do when you receive money.”

Speaking from personal experience, Tan Sri Abu Kassim noted that one of the biggest hurdles to political accountability is the lack of current legislation that punishes “ignorance and dishonesty”. However, there are areas under the UN Convention Against Corruption (UNCAC) and some leading countries that have criminalised the misconduct of politicians and government officers. The government is looking into these as well as policies to reduce conflict of interest situations and misuse of authority by government officials and political staffers assisting ministers, he added.

Tan Sri Abu Kassim also singled out the government’s efforts to stop the culture of “political lobbying” and rent-seeking, where huge profits are made on inflated contracts awarded through political connections but just a small percentage goes to the companies actually doing the work. “This is sabotage to the Malaysian economy.”

Doing it Our Way

According to Tan Sri Abu Kassim, there are various scales of corruption and how it is manifested out there. “We can say that all corruption is not the same but somehow, it may demonstrate itself (as being) rather similar around the world. Be it bribery, conflict of interest, embezzlement, abuse of power, influence peddling, nepotism, and so forth, the causes of such crimes and the areas they hit can vary to a certain extent. The scales of corruption and their effects differ across society, economic and political facets. By understanding the feasible factors that may contribute to these orders of corruption in terms of greed for wealth and power, we should then be able to characterise the kinds of corruption, integrity and governance issues our country is likely to undergo.”

Accordingly, theNACP was developed to fit the Malaysian context using internally-derived data and guidelines, taking into account sources such as UNCAC standards and recommendations, the Malaysian Anti-Corruption Commission (MACC) manifesto and the report of the government’s Institutional Reforms Committee (IRC).

All for One and One for All

Tan Sri Abu Kassim urged all parties to come together to build a better governance system that embeds integrity. “When it comes to corruption, it doesn’t just involve the authority where the MACC catches the criminals.” All must be involved – private sector, NGOs, civil society and the public.

“This NACP will be our first-ever plan created to communicate our Government’s intention and set a coherent framework in dealing with the issues of governance, integrity and anti-corruption. Non-cooperation from any of the actors will only mean that we fail to undertake the desirable changes for Malaysia. It would reflect a bad image of our country and our future prosperity will be at stake.”

“MIA plays a very important role especially in education and regulation through punishment and fines, because these have a deterrent effect,” he concluded. Accountants play an especially important role in fighting corruption by upholding integrity and good governance, he stressed.