Trident Integrity Solutions CEO Dr. Mark Lovatt talks about some best practices for implementing whistleblowing, as well as the expected challenges and repercussions.

What do Sherron Watkins, Jeffrey Wigand and Michael Woodford have in common? They put themselves on the corporate map by blowing the whistle on their respective companies. Watkins, an accountant and VP of Corporate Development, helped expose the Enron fraud. Wigand, VP of R&D at Brown & Williamson, a company that was manufacturing reduced-harm cigarettes, claimed that it had intentionally manipulated its tobacco blend with chemicals. Woodford, CEO of Olympus, exposed how the optical equipment manufacturer was hiding its losses. While they became the poster children of whistleblowing, held up as icons of integrity, their actions practically ended their corporate careers and made their lives very difficult indeed. 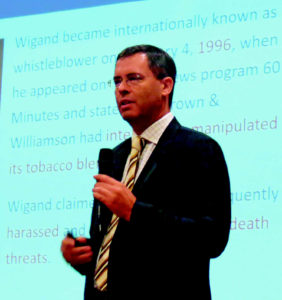 Whistleblowing brings bad practices to light, said Dr. Mark Lovatt, CEO, Trident Integrity Solutions at his presentation, “Whistleblowing – How Best to do it?” at the Trust & Integrity Conference 2018. Dr. Lovatt said that if companies depended exclusively on their accounts to tell them that something was not right, only a small portion of wrongdoing would be obvious. “You won’t know everything that is going on,” he said. “Whistleblowing works by getting people who have integrity to help you expose wrongdoing.”

Besides fraud, other malpractices that can be uncovered or reported by whistleblowing include theft, discrimination, harassment, damage to property, negligence, breaches in data, health or safety rules, insubordination, alcohol or substance abuse, misconduct, bringing the organisation into serious disrepute and bullying. All this is undesirable behaviour that needs to be nipped in the bud or else the firm runs the risk of it becoming accepted practice – with even worse repercussions. Whistleblowing is primarily an internal practice so the company has a chance to resolve the issue before the matter goes public, which could cause considerable damage.

The Costs of Not Implementing WhistleBlowing

Companies that don’t have a whistleblowing protocol in place could pay a heavy price. Dr. Lovatt illustrated this with a case study on the Volkswagen “Dieselgate” scandal, which came to light in September 2015. VW was found to have intentionally programmed its diesel engines to activate emissions controls during laboratory testing, thereby manipulating the results of regulatory testing. This made it seem that its vehicles were meeting emissions standards but this was not true; 11.5 million cars were affected, globally.

When the scandal broke, VW became the target of regulatory investigations in multiple countries. Its stock price took a beating; many of its senior management resigned, was suspended or arrested; and VW had to spend billions of Euros on rectifying the issues, with The Wall Street Journal reporting that the company had taken a USD18.28 billion hit because of the emissions scandal. The VW Group had included iconic marques like Lamborghini, Audi, Bentley, Porsche, Bugatti and Ducati; the VW name was now mud. But all this could have been avoided if VW had encouraged whistleblowing. Investigations revealed that the manipulated emissions results had been common knowledge. VW is not the exception; even Rolls-Royce has experienced financial scandal – a £671m fine arising from their practice of using bribes to win business across the world.

Dr. Lovatt also noted that whistleblowing could be an avenue to combat corruption. Globally, IMF statistics estimate that the cost of corruption in its many forms totals about USD2 trillion annually. In Malaysia, 30% of companies experienced bribery and corruption, in 2015. Having the right systems in place with protection for people of integrity who blow the whistle could be a means to plugging these leakages.

If whistleblowing systems are to work, they should be secure, Dr. Lovatt said, with well-defined, accessible channels and processes that allow anonymous reporting and protection of whistleblowers. Staff who deal with these matters require training too. The system should create trust in all who use it. Dr. Lovatt cited the efforts of multinationals Shell, Petronas and Coca-Cola as some examples of whistleblowing systems that tick all the boxes. “Hotlines are an asset to a company,” he said.

Whistleblowers, unfortunately, do not always do well after the deed is done, despite having great integrity and really caring about the company they work for. There is always fear of retaliation, uncertainty and scepticism that action will be taken. In Jeffrey Wigand’s case, he claimed to have even received death threats. Harassment, loss of seniority or job responsibilities and maybe even backlash from your own colleagues are all stark possibilities. But these hazards have not deterred whistleblowers from heeding their conscience and doing the right thing. In a 1987 survey of whistleblowers, only 20% felt their actions had affected workplace change – but even with those odds, more than 50% of them said they would do it again!