The advent of MFRS 16 Leases, which took effect on 1 January 2019, saw a paradigm shift in the treatment and ultimate recognition of rights and obligations arising from lease contracts.

The previous standard, MFRS 117, differentiated the accounting treatment between finance and operating lease arrangements. While finance leases were duly accounted for on the balance sheet, operating leases under MFRS 117 did not necessitate capitalisation of leased assets as well as the recognition of the corresponding liabilities by the lessee. In hindsight, this seemingly simple treatment proved undesirable, as it not only lacked adequate transparency but also enabled off-balance sheet financing practices to proliferate.

MFRS 16 addresses this as there will no longer be a segregation between finance and operating leases. “MFRS 16, which features a single model for lessees, recognises the ‘right-of-use’ approach in its conceptual framework,” explained Simon Tay Pit Eu, Executive Director, Professional Practices and Technical, MIA at the session on lease accounting during the MIA MFRS Conference 2019.

Under MFRS 16, all rights and obligations under leasing arrangements will thus be accounted for as assets and liabilities respectively. 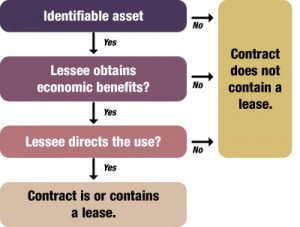 Under MFRS 16, a lease is defined as a contract or part of a contract that conveys the right to use an identifiable asset over a period of time in exchange for consideration. “After scoping out certain assets covered by other standards, for example, the lease of biological assets under MFRS 141, the pertinent question under MFRS 16 is whether there is an identifiable asset,” advised Simon. The ‘right to use’ is basically interpreted as the lessee’s ‘right to the economic benefits derived from, and the ability to control the use of, an asset throughout its lease term. The lease term is the non-cancellable period of the lease, including the timeline involved to extend and/or terminate the lease term.

On the contrary, short-term leases (with a 12-month repayment period or lesser) and leases of low value assets are accorded optional exemptions, where such repayments are written off as expenses in the profit and loss account throughout the lease term.

Leased assets are initially recognised at cost, akin to other non-financial assets, which also includes direct costs and restoration costs. Subsequent measurements would need to take into account the assets’ depreciating values and other cost or impairment adjustments. Additionally, MFRS 16 also allows lessees to apply the fair value model and revaluation measurements for the subsequent measurements of investment properties and certain classes of property, plant and equipment, respectively.  Leased liabilities, on the other hand, are initially measured by computing the present value of all unpaid lease payments, including non-cancellable lease payments, and payments to be made in optional periods. Subsequent measurements would need to account for lease payments made, interest due, and lease modifications, if any.

“Companies are provided with a choice to either fully adopt the MFRS 16 framework retrospectively or apply the modified retrospective method,” said Simon. Unlike the retrospective approach which necessitates a restatement of financial and comparative information, the modified retrospective approach just requires a cumulative adjustment be made to equity at the initial application date (1 January 2019 for calendar year ends). To ease transitional woes by way of reducing the need to reassess all lease contracts, MFRS 16 allows for the application of various practical expedients, which enable the taking of pragmatic approaches that make good business sense. For example, as a practical expedient, an entity is not required to reassess whether a contract is, or contains, a lease at the date of initial application for contracts previously identified as leases under MFRS 117 and IC Interpretation 4 Determining whether an Arrangement contains a Lease. Another practical expedient is that for leases with a remaining term of less than one year at the date of initial application, the lessee may choose to apply the short-term lease exemption in MFRS 16 and expense lease payments rather than recognise a right-of-use asset and a lease liability at the date of initial application. The application of a practical expedient is an accounting policy choice to be applied consistently to all contracts on transition.

Quantitative disclosures impacted during the MFRS 16 transition are the incremental changes to assets and liabilities, reduction in operating cash flows, profitability variation caused by the increase in financing costs and depreciation, and also the reduction in lease rental expenses.  Qualitative disclosures are those relating to liquidity risks, the practical expedient methods adopted, and the leases falling within the ambit of optional exemptions, amongst others. Other occurrences such as residual value derivatives, future cash flows arising from variable lease payments, committed leases that have yet to commence or any unusual arrangements that may impact the company should also be disclosed accordingly.

As this is a complex standard with potential tremendous impact on the financial statements, implementation poses diverse challenges. “One of the key challenges in the implementation of MFRS 16 would be to fully comprehend its key requirements,” said Lee Pei Yin, Partner, EY Malaysia.

To ensure a smooth transition, proper project governance is necessary. Pertinent factors such as lease arrangements and its impact on businesses in terms of changes to business practices,  implementation costs, timeline involved, availability of resources, disclosure requirements, amongst others, must be deliberated very carefully. This is to ensure the objective of transparent, timely, meaningful and reliable information are met for all stakeholders.

“Managing expectations is of utmost importance”, advised Sim Siew Shan, Group Financial Controller, Air Asia Group Berhad, the airline company that previously recognised its fleet of airplanes as operating leases under MFRS 117. The transition to MFRS 16 caused quite a stir amongst stakeholders as it led to the capitalisation of leasing rights and obligations which were previously disclosed only as off-balance sheet commitments. Profitability figures were negatively impacted which resulted in tough discussions taking place at management and board levels. Siew Shan said that the core profits of the business will not be affected by lease transitional adjustments and stressed that the finance function must engage on MFRS 16 with the management and board in order to manage their expectations.

“Engagement with your business team is critical,” concurred Ramamoorthy. R, Senior VP Finance, Axiata, a telecommunications company with thousands of lease arrangements, such as cell tower leases, internet leased lines, amongst others. The organisation as a `whole is as much as part of the MFRS 16 transition as the finance department. The key challenge is to understand the underlying intent, conditional terms and duration of each contract to facilitate not only the transition to MFRS 16, but its subsequent measurements as well. “Leverage on technological tools and acknowledge information gaps early on to ensure that all relevant data relating to lease arrangements are captured expeditiously and efficiently,” he advised.